When I “test” a new paper, or one I haven’t tried in a long time, the first thing I like to do is see how it “feels” compared to a paper I’m used to.

When I got my first sample of the Adox paper, I had just finished producing a batch of Ansel Adams’ Moon and Half Dome prints for The Ansel Adams Gallery. Since the negative (made on 120 Adox R17 12/28/1960) was still in my Omega D5500 enlarger, I had a perfect opportunity to see exactly how the paper would perform with a high quality image I had printed many many times.

The first result: an absolutely lovely image. It required no change in the “no filter” setting I usually use with this negative on Ilford Multigrade FB – so “normal” contrast seemed to be right on. It had a beautiful gradation of tonality from blacks to clean whites. It seemed a bit faster than the Ilford, but for the Adox test I was using a higher concentration of Dektol than I had used for the production printing.

The image seemed to show a slight tendency to split-tone in Ilford Selenium toner 1:10 for 4 minutes. The split was not as noticeable as I had seen with its predecessor, Agfa MCC. In a subsequent toning I cut the time to 3 minutes, and that seemed fine.

The surface quality seems to be beautifully glossy.

After such a first informal evaluation, the next thing I like to do is quantify a paper’s contrast range – how far will it go hard and soft? For this test I use a 4×5 Stouffer 31-step test film. With the test negative in the enlarger I first determine an exposure so that with no filter I get a print where I stop getting any increase in “black” somewhere around steps 3 to 5. After the print is dry I then see which step appears to be paper white. I then do the same thing with maximum magenta and maximum yellow filtration. The enlarger and its colorhead are over 25 years old and I now can’t get a filter setting beyond 164 Magenta or 164 Yellow. Even so, this is enough to get contrasts of 00 and 5+ with Multigrade.

With the Adox, “no filter” had almost identical contrast as Multigrade and slightly harder than Foma or Oriental. At 164M it was slightly softer than the Multigrade and identical to the Foma and Oriental – maybe a Grade 5. At 164Y it was off-the-chart soft. I was not able to get either a black or a white from the Stouffer film. At 130Y I got a near-black and near-white.

Summary: The Adox MCC 110 seems to be an absolutely excellent paper. Its paper base is now white rather than the “natural” white of the Agfa version, but the image color seems to be the same slightly-warm as the Agfa. Excellent printing speed, tonal gradation and contrast range. 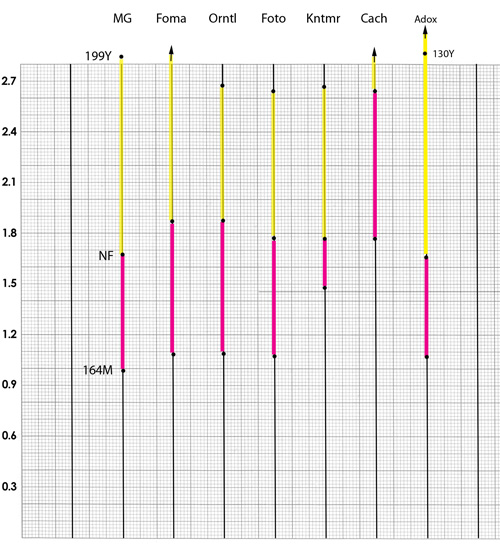