How Do Light Meters Work?

Most of us can understand that a reliable light meter, either in-camera or hand-held is pretty essential to getting good film or digital exposures – but just how they work might be a matter of some mystery or confusion!

When light meters were first made, they were pointed from camera position toward a scene, measuring a rather broad area, evaluating the average brightness of objects either emitting light or reflecting some amount of light back toward the camera.  The assumption was that if you mixed all the lights and darks in an “average” scene into one brightness, that mixture would be some sort of middle gray.

It was decided that that middle gray represented a neutral color reflecting 18% of the light falling on it.  Photoshop-wise – that works out to a black set at about 55% opacity.

In photography, this works out fine so long as your meter (or camera) is reading an equal mix of lights and darks, or you are metering something that is itself middle-gray in brightness.

•  But what if you are photographing a white horse in the snow?  The meter thinks it is looking at something gray – and thus will give you the correct exposure to make that horse and snow GRAY!  The solution is to give MORE exposure to your film or image sensor so that the scene is given enough light to look like a textured white in the image.

With film, this is about 2.5 to 3 stops more light than your meter reading.

With digital, this may be only 1.5 to 2 stops more light than the meter reading.

•  Conversely, if you are photographing something dark in a dark surround, the opposite approach comes into play.  The meter will tell you how to expose to make that DARK scene a middle gray!  You then need to give LESS exposure to force that scene to look dark.

With film:  a 2 to 3 stop reduced exposure will run you from a textured dark to nearly black.

With digital: a 1.5 to 2.5 stop reduction will typically run you from a textured dark to nearly black.

A word of caution:  Some, if not many, of the modern in-camera meters with computer analytics can come up with completely unpredictable exposures.  First, they seem to all be calibrated towards acceptable exposures for color slides or digital – so if you are working with a bw negative film (and to some extent color neg) you are almost certain to get a good looking contact sheet with terrible shadow detail.  Second, computer analytics are not the same thing as thinking!  The most sophisticated metering system in existence has no idea of WHAT it is analyzing!  If you want to be in control of image tonality, you need to have an understanding partnership with your metering system and equipment. 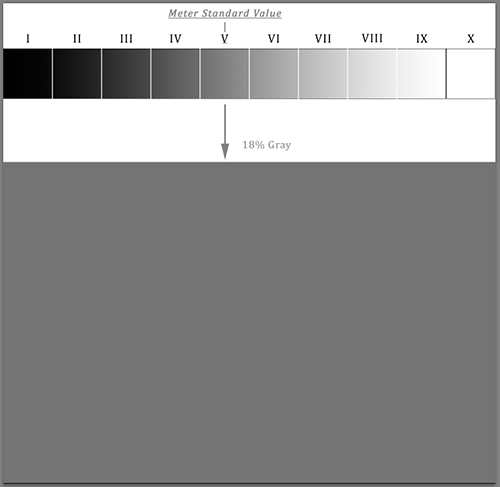