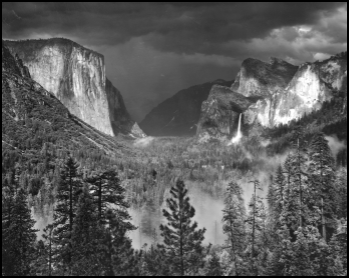 One of Ansel Adams’ personal commitments was to share his energy and abilities in support of the things he believed in, most notably, photography and the environment.

In the cause of both, Ansel and his wife, Virginia, selected six photographs of Yosemite and offered them for sale through her family business, Best’s Studio, in Yosemite National Park. The year was 1958.

Ansel’s intent was to present photography as an affordable art and to showcase the environmental grandeur of Yosemite National Park. Never much of a fan of the “curios” that were the staple of most Park concessioners at the time, he also wanted to offer visitors a quality memento of their time in Yosemite.

The 8×10 prints would be made from the original negatives by an assistant under Ansel’s precise direction and be printed in sufficiently large batches to make them affordable.

This collection, entitled the Yosemite Special Edition Photographs, proved immensely popular and over the years, Ansel added more images to the set until the total was capped at 30 at the time of his passing in 1984.

Today, Best’s Studio is known as the Ansel Adams Gallery, and continues as a family-run business. Ansel’s Special Edition Photographs of Yosemite are a mainstay of the Gallery’s offerings and heritage. Each print is still made by hand directly from Ansel’s original negatives, using his approach and methodology to ensure strict adherence to his standards and aesthetic.

And while Ansel’s archives eventually became part of the permanent collection of the Center for Creative Photography at the University of Arizona at Tucson, he made special provisions for the Special Edition Photograph negatives to be held back from the archive so that the tradition of offering high-quality original art at affordable prices would continue as his personal legacy in support of the arts and the environment.

I became Ansel’s assistant in the middle of 1974, working with Ted Orland, who had been Ansel’s primary assistant for the previous two years.

When Ted left in early 1975, I inherited not only the responsibility of keeping all of Ansel’s photographic operations running, but also the making of the Special Edition prints. Don Worth, Gerry Sharpe, Liliane DeCock, and Ted had all served in this capacity before me, all of us working as Ansel’s eyes and hands in the darkroom. Not easy, but an immensely rewarding challenge.

Although Ansel’s hands were not in direct contact with the Special Edition printing, his vision always was. He was consulted through test and sample prints, and the challenge was to be able to anticipate and respond technically to his requests.

”Make it a little darker over here,” he would suggest, or, ”Can you make it a bit more contrasty?” he would ask. The final approval was a slap on the back along with a hearty, “Ya got it, man!”

In 1979, I left Ansel’s employ to open my own studio in San Francisco, but he liked the way I was printing his negatives and asked me to continue making the Special Edition prints. In his autobiography, Ansel said, “Alan was my photographic assistant from 1974 until 1979, and he continues to make the Special Edition Prints with sensitivity.  He knows those negatives thoroughly and interprets them as closely as possible to my original fine prints of those images.”

Making the Special Edition Photographs is an assignment I continue to this day, with Ansel’s vision and standards always in mind as I work. The prints are still made directly from Ansel’s negatives and in the “traditional” way: in a wet darkroom with amber safelights, chemicals and running water. The prints are still silver-gelatin prints, meaning that the image-forming element is literally metallic silver. Precious.

And after nearly 40 years, I can honestly say that I never tire of seeing these images come up in the developing tray. It’s an honor and privilege to play a small part in continuing Ansel’s legacy.

For the technical details on the making of the Special Edition prints, click here.

Alan Ross Photography would like to acknowledge the assistance and support of the Ansel Adams Gallery staff and Freestyle Photographic Supplies.