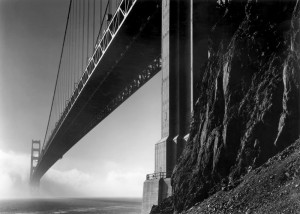 Golden Gate Bridge, North Tower and Rocks, 1989 On Assignment for The Bank of America

When I first moved to Carmel to work with Ansel Adams in 1974, I made several significant images within the first month or two. Then for the next five years pretty close to nothing.

After I moved to San Francisco in 1979 to open my own studio, I got an assignment to photograph in the Big Sur-Carmel area, and I made two significant photos in one day. One was only a mile south of Ansel’s house!

In 1989 I accepted a contract with a large advertising agency in San Francisco for Bank of America. Project? Shoot the Golden Gate Bridge. Well, I grew up in Sausalito, California, and it is the first town on the north side of the bridge. I NEVER had ANY desire to make an image of something so familiar (and so over-photographed) but I took the job and the incentive kicked me into making a few of my very best images.

Now, having lived in Santa Fe for over 18 years, I find I hardly ever get a camera out at home. The reality? Over-familiarity and the distractions of daily life. I still am amazed by the boggling thunderclouds that build up in the summer and fall – but I haven’t DONE anything about them in years. Errands to run, darkroom work to do, etc.

In the early 1960’s, Ansel Adams, who was born, grew up in, and was still living in San Francisco, took on an assignment that essentially was going to be Ansel Adams’ San Francisco. Always a hard worker, he took to the task with enthusiasm – but after a few months, and a few fair images, he conceded that he was too close to the subject and regretfully bowed out. Conversely, even though he maintained a house in Yosemite, and his wife and children lived there pretty much full time, Yosemite wasn’t his daily environment, and it remained easy for him to maintain his visual enthusiasm about the place.

I think the most difficult thing for any of us, whose work is in the recording and expressive interpretation of our surroundings, is to work “close to home”. I am in Dallas as I write this, and I am promising myself that I will get a camera out when I get home to Santa Fe.

Some times you just have to prime the pump.