In 1927, during one of his regular trips to Yosemite, Ansel Adams trekked up to the “diving board” on the west shoulder of Half Dome. There, he made a dramatic image of the monolith using a mild yellow filter to darken the sky a bit—a generally recommended and accepted practice in those days.

But what Ansel felt about the scene before him was more dramatic than what he knew the yellow filter would give him. With one plate left unexposed, he daringly made another exposure, this time using a red filter that he hoped would result in an image that was more in tune with what he imagined, or visualized, the final image should be, instead of what was actually in front of him.

The image that resulted from this experiment proved to be a turning point for Ansel in his photographic explorations. For the first time, he was conscious of the difference between what his camera lens saw (the literal) and what he saw in his mind’s eye (the expressive) as the final print.

Ansel ultimately came to refer to this freedom from recording only that the camera and lens could capture in a technical sense to visualization, and he wrote about it extensively during his lifetime.

By itself, visualization doesn’t assure a successful final image, but it does set the stage for the ensuing choreography of photographic steps. To my way of thinking, it is the single most important element in creating an expressive image.

So…just what is visualization and how do you visualize?

Simply put, visualization is a confluence of imagination and technique. It is the ability to picture the final print in your mind before releasing the shutter and possessing the technical know-how to create the image that’s in your mind, even if it differs from the reality of the scene in front of you.

One of Ansel’s favorite sayings was, “There’s nothing worse than a sharp image of a fuzzy concept.” At the same time, a concept can be sorely limited in clarity by a fuzzy knowledge of technique. The two go hand-in-hand.

In Ansel’s case, his knowledge of technique—knowing what a strong red filter ought to do—enabled him to imagine, or visualize, a final print with a much darker sky than the yellow filter would have afforded. He visualized how he wanted the print to look and used the techniques to execute his vision.

Visualization does not, however, require that you see a finished print that is markedly different from the real qualities of the actual scene. It could be as simple as “seeing” a final color image in delicate pastels rather than in bold, vibrant colors and contrasts. It might mean choosing a particular vantage point to emphasize the qualities of a foreground object. But in all cases, visualization dictates the techniques required to achieve the vision.

The next time you’re out photographing, try taking a moment to disconnect from the reality of the scene in front of your lens, and try to see it as a print.  Is the sky in that print going to be darker than your meter says it ought to be?  If it’s in black-and-white, will skewing color relationships with a filter strengthen your statement? Will a longer or shorter exposure enhance motion in a scene?  These are all things I consider  – usually even before I set the camera up.  With practice you won’t even know you’re doing it – you will have already done it!  That’s visualization.

A cut-out card is a great way tighten up your composition! 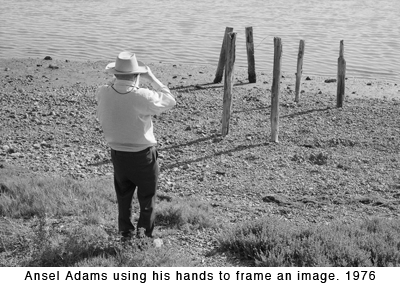 And here are some thoughts by Georgia O’Keeffe on the concept of rendering something seen:

“The Ranchos de Taos Church is one of the most beautiful buildings left in the United States by the early Spaniards. Most artists who spend any time in Taos have to paint it, I suppose, just as they have to paint a self-portrait. I had to paint it – the back of it several times, the front once. . . . And I long ago came to the conclusion that even if I could put down accurately the thing I saw and enjoyed, it would not give the observer the kind of feeling it gave me. I had to create an Equivalent for what I felt about what I was looking at——not copy it.” 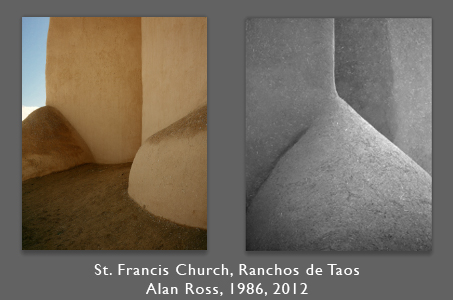